TB Alliance has built the largest portfolio of potential new tuberculosis (TB) treatments in history. Since inception, it has introduced eight products—five pediatric formulations of first-line TB therapy and a new therapy for the treatment of extensively drug-resistant, treatment-intolerant or non-responsive multidrug-resistant pulmonary TB. The process of building this historic portfolio hinged on innovative approaches to drug development and navigating the global research landscape.

At the time of TB Alliance’s establishment, the organization brokered partnerships with leading pharmaceutical developers and other researchers around the world to screen their libraries of existing or late-stage compounds in hopes of unearthing promising drug candidates. However, high expectations were met with few prospects. As former TB Alliance president and CEO, Dr. Maria Freire, recounts:

“The idea was that we had all these compounds sitting on shelves in pharmaceutical companies and it was only a matter of pulling them up and developing them and we would have this incredible, new armamentarium of antibiotics. Well, when you started really looking at that list and testing the concepts, there were very few things that were left.”

The realization that TB Alliance would have to work actively across the entire drug development process was one of the organizations first necessary strategic pivots, resulting in the establishment of a dedicated drug discovery program.

The TB Alliance portfolio from 2003.

One of the most promising early TB drug candidates was a compound that TB Alliance would eventually lead this compound through full clinical development and regulatory approval as part of a new treatment regimen for highly drug-resistant forms of TB. This progressed to clinical testing in 2005, around the time that an outbreak of extensively drug-resistant TB (XDR-TB) emerged in the KwaZulu-Natal province in South Africa, thrusting the threat of “untreatable” forms of TB into global headlines. Three years later, TB Alliance would launch REMox TB, the first Phase 3 TB drug trial conducted to modern regulatory standards. 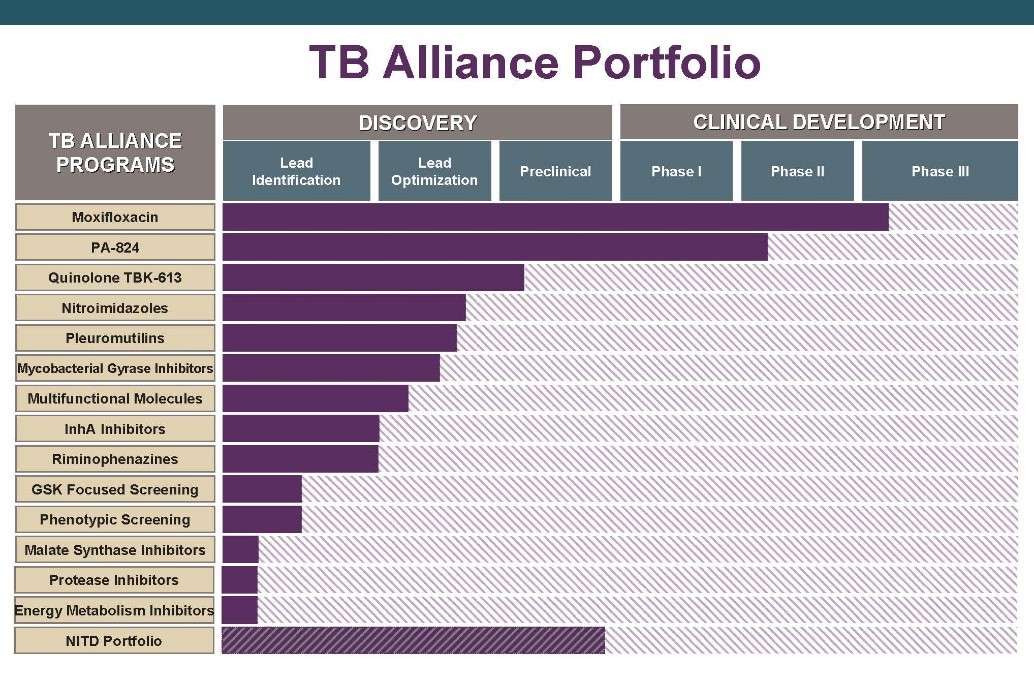 The TB Alliance portfolio from 2008.

Growing the portfolio was an organizational imperative, as was advancing the paradigm by which TB drug development was conducted. In its first decade, TB Alliance built its portfolio to include more than 20 research programs. It had also advanced the concept of regimen-based development to accelerate the pace of innovation. With the establishment of a preclinical combination testing program to identify the most promising regimens and the formation of the CPTR initiative setting the stage, regimen development became a reality when TB Alliance launched the NC-001 trial in 2010, the first clinical trial testing a TB treatment regimen with multiple new compounds. 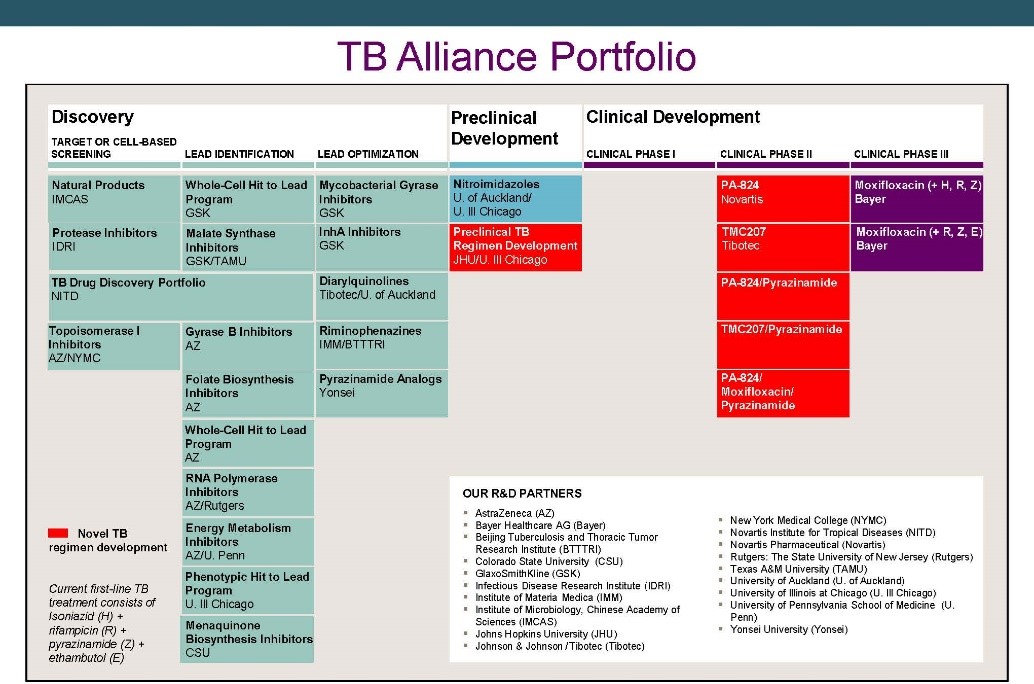 The TB Alliance portfolio from 2010.

TB Alliance subsequently conducted seven additional “NC” trials testing new combinations, including the Nix-TB (NC-007) study which launched in 2015. Nix-TB was the first trial to test an all oral, six-month, three-drug regimen for XDR-TB, which would ultimately result in the Phase 3 data on which a new treatment regimen for XDR-TB was approved. One year later, in 2016, TB Alliance began bringing its first new products to market – a set of child-appropriate individual drugs and fixed-dose combinations for the treatment of drug-sensitive TB. This advancement was the product of a collaboration with Unitaid, the WHO Global TB Programme, and Department of Essential Medicines and Health Products that began in 2013. 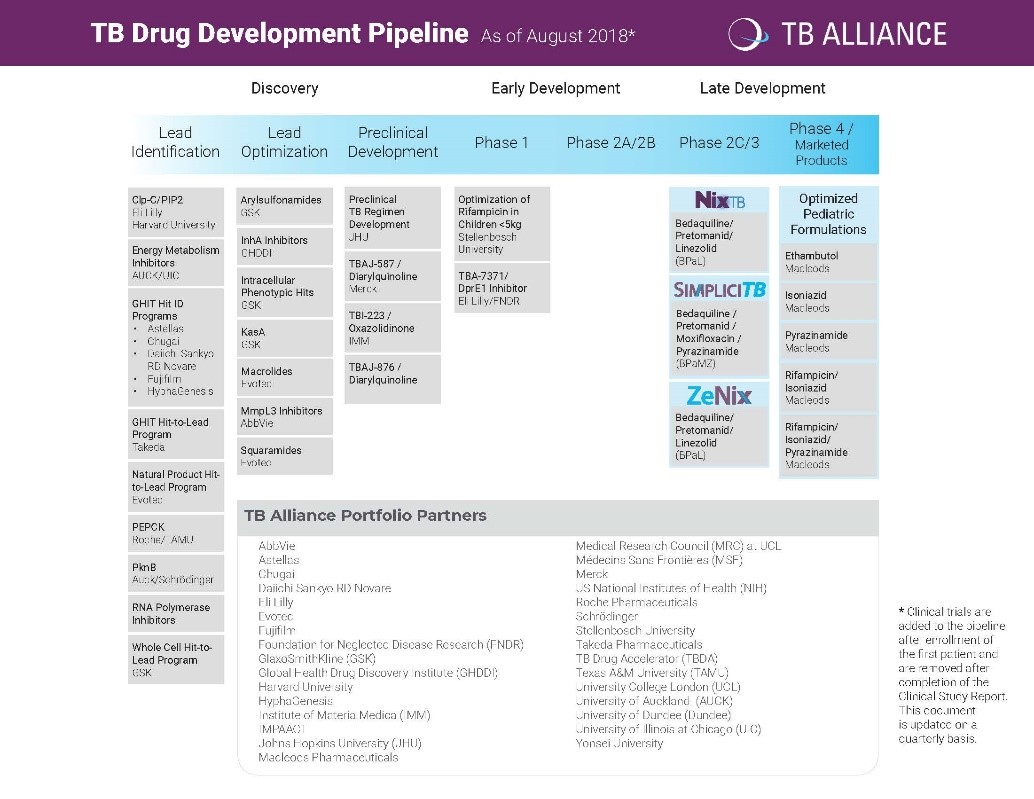 The TB Alliance portfolio from 2018.

As of this writing, TB Alliance’s portfolio currently consists of more than 30 active development programs, including 8 clinical stage programs. Though the journey from inception to this point has been characterized by innovation, partnership, and impact, none of this progress would be possible without the consistent support of our partners, funders, and affected communities and trial participants.

The TB Alliance portfolio from 2021.