TB Alliance has shifted the TB treatment research paradigm from a focus on developing individual drugs to one of developing regimens of multiple drugs.

This transition depended on accessing a sufficient supply of enough new and experimental drugs to form new regimens. It also requires a way to enable multiple sponsors to test their drugs together and identify the most promising combinations, as well as a regulatory framework capable of evaluating and approving new cures based on evidence from regimen-based trials. Years of building support for a regimen-based development path began to show results in 2010, when TB Alliance launched NC-001, the first clinical trial to test multiple new TB drugs in combination.

“We see this as a paradigm shift in methodology and it's been one that industry as well as regulators … have been very supportive of.”

NC-001 (NC being short for “New Combination”) was a Phase 2 early bactericidal activity trial. It evaluated multiple combinations of new and experimental TB drugs, including PaMZ (pretomanid, then known as PA-824, in combination with moxifloxacin and pyrazinamide.) Though not formally approved for TB therapy, moxifloxacin was commonly used in drug-resistant TB treatment, while pyrazinamide was one of the four drugs comprising the treatment regimen for drug-sensitive TB. Preclinical data suggested that the experimental regimen had the potential to treat both drug-sensitive and drug-resistant forms of TB. This trial enrolled 68 patients and was conducted across two sites in South Africa.

NC-001 found that the regimen killed more than 99 percent of patients’ TB bacteria within two weeks, with results published in The Lancet. The success of this trial helped to establish the pathway for regimen development, with TB Alliance leading seven additional “NC” trials to date.

As part of this pathway, TB Alliance co-founded the Critical Path to TB Drug Regimens (CPTR) ahead of the launch of NC-001. In partnership with the Bill & Melinda Gates Foundation and Critical Path Institute, this initiative supports regimen-based trials by accelerating research, mobilizing resources, and facilitating regulatory advances. CPTR partners included pharmaceutical developers, civil society organizations and funders. Work undertaken under CPTR engaged national regulatory authorities as well as the World Health Organization to pave the way for trials like NC-001.

With approval for a new TB regimen in 2019 and others under clinical evaluation, TB Alliance and its partners are carrying out their mission of shortening and simplifying TB therapy. 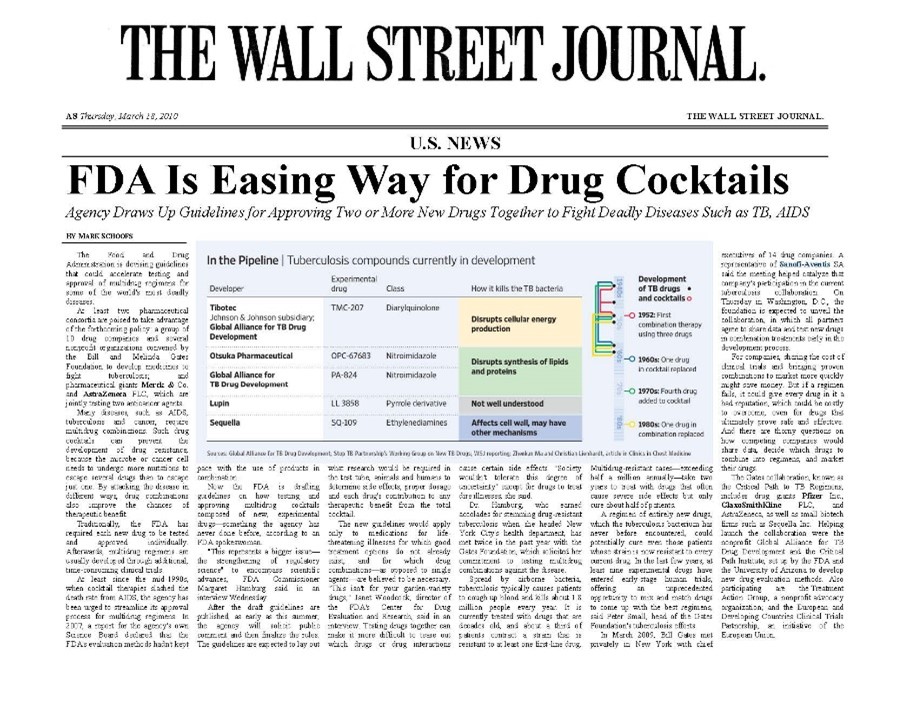