In 2008, TB Alliance launched the first Phase 3 clinical trial of a new TB drug in four decades. The “Rapid Evaluation of Moxifloxacin in the treatment of sputum smear positive tuberculosis” (REMox-TB) study sought to determine whether a four-month TB treatment, which substituted moxifloxacin for a drug in the existing regimen would be equally or more effective than the six-month four-drug standard of care for drug-sensitive TB. While the final results of the trial indicated the efficacy of the moxifloxacin-containing regimens measured shy of that standard, REMox TB was trailblazing and pivotal for the TB drug development landscape in many ways, including building clinical trial capacity, informing future research, engaging local communities, and building bridges with HIV/AIDS researchers. 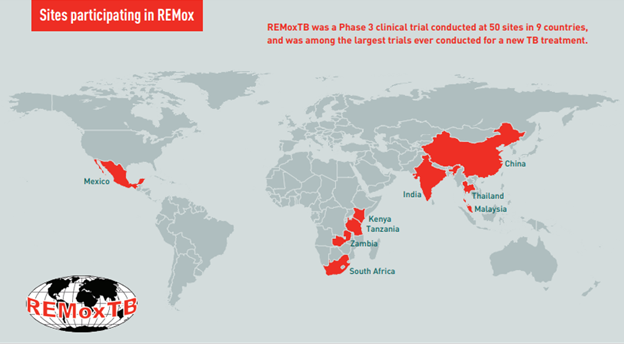 At the time of REMox TB, there had not been a Phase 3 TB drug trial conducted to the current regulatory standards. TB Alliance was building the infrastructure and blueprint for modern TB research in real-time. Extensive work was done in preparation of the trial’s launch, including a global evaluation of potential trial sites in order to assemble a network of research centers capable of meeting the current standards of the world’s most stringent regulatory authorities. With the bulk of TB cases occurring the world’s most impoverished communities, this was challenging. In some instances, grants were supplied to modernize infrastructure to meet regulatory standards. Many of these sites would go on to be used in many additional future studies.

Fran Pappas, Director of Clinical Operations at TB Alliance looks back at trial with pride, noting, “I’m very proud to have worked with an incredible team of partners to complete this trial, especially the physicians and their staff – and most importantly the patients. I specifically remember a lab worker thanking TB Alliance for helping to make the lab safe for work.”

Successfully initiating, administering, and completing a Phase 3 clinical trial was also a proving ground for TB Alliance itself. As a not-for-profit product development partnership that often sought to partner with or acquire IP from “big pharma,” it was integral for TB Alliance to prove itself capable of conducting a trial of this magnitude – regardless of outcome.

REMox TB Chief Investigator, Dr Stephen H. Gillespie of University of St. Andrews succinctly surmised the impact of REMox TB on the field by stating, “REMox TB has generated an enormous amount of learning in how to deliver a regulatory-grade tuberculosis trial for the future.”

At the same time she remarked, “REMox TB researchers learned valuable lessons in the process as well, including the importance of community involvement in research and the value that a community stakeholder has in advocating for such research to their local policy makers.”

While the exact treatment regimens tested in REMox TB did not meet the desired endpoint, the findings further built the evidence base for use of moxifloxacin in TB therapy. Moxifloxacin continues to be an important component of modern TB treatment and research.

Resources:https://www.tballiance.org/news/enrollment-complete-remox-tb-global-phase-iii-clinical-trial – statements from partners about participating in the trial