At TB Alliance’s inception in 2000, the landscape for tuberculosis (TB) drug development had been stagnant. “There had been almost 50 years with almost no action,” recounts founding board member Ariel Pablos-Méndez. Treating TB requires a combination of drugs, and advances in therapy had hinged on the development of individual drugs to either replace one drug in an existing treatment regimen or add to the regimen. 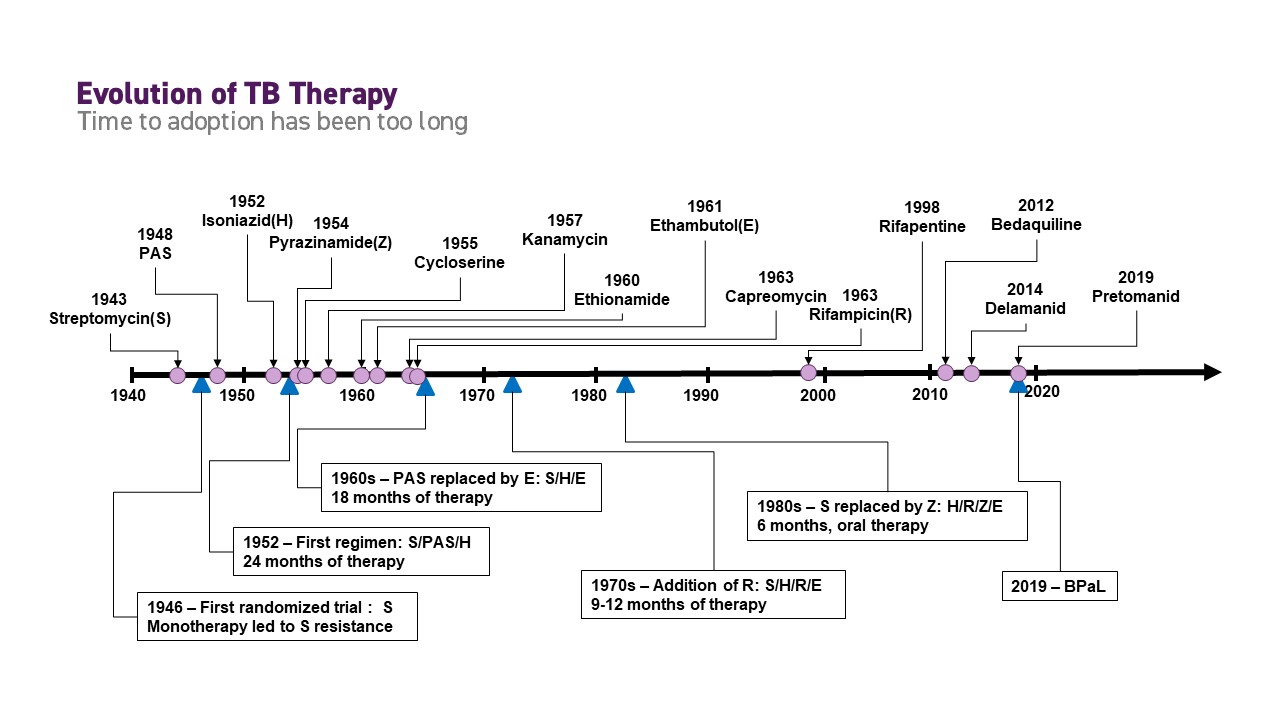 Integrating new drugs into existing regimens could not however address many of shortcomings of those regimens, such as complexity, safety or cost. This approach proved to be both resource-intensive and time-consuming, especially in the face of millions of people developing active TB each year and the growing challenge of TB drug-resistance.

Facing the daunting challenges in making significant improvements in TB therapy, it became clear that a paradigm shift was needed to deliver impactful solutions. As TB Alliance assembled its portfolio and established novel funding streams, its leadership looked to a new approach: instead of developing single drugs, TB Alliance would focus on developing combinations of multiple new drugs at the same time.

This new approach was shaped in the late 2000s by TB Alliance’s Director of Research and Development (now President and CEO) Dr. Mel Spigelman. As Dr. Maria Freire, TB Alliance President and CEO from 2001-2008, recounts, “Mel plops his papers on the table and says, you want innovative? Okay, so we’re not going to go for drug development in the normal way; we’re going to go for drugs in combinations.”

Regimens made up of all-new drugs could also potentially sever the distinction between drug-sensitive and drug-resistant forms of the disease, providing the same treatment experience for every patient regardless of their responsiveness to older drugs.

In partnership with Johns Hopkins University, TB Alliance established a Preclinical Regimen Testing Program to identify the most promising combinations for human studies. In total, more than 250 potential unique drug combinations have been tested in the lab as part this initiative.

Today, a new, three-drug regimen has been approved for the treatment of highly drug-resistant forms of TB, with additional novel combinations in late-stage clinical trials with the potential to impact a wider segment of the global TB patient population.

Ultimately, the model of regimen development seeks to realize a long-term vision of multiple “universal” regimens capable of treating every person with TB in a short, safe and effective manner.

In reflecting on that turning point, former Chief Medical Officer Dr. Ann Ginsberg notes that “it kind of seemed self-evident once [Mel] said it - but nobody else was saying it at that time!”