Rifampin is one of the drugs used in standard, first-line TB therapy for drug-sensitive patients. The “newest” of the first-line TB drugs, it was discovered in 1963. Rifampin exhibits very effective activity against persisters in the continuation phase of treatment, but also creates challenges in the treatment of patients co-infected with both TB and HIV.

Rifampin inhibits the essential rpoB gene product, the B-subunit of DNA-dependent RNA polymerase activity, acting early in DNA transcription. It is thought to bind to the B-subunit, close to the RNA/DNA channel, and physically blocks the transit of the growing RNA chain after nucleotides have been added. In Escherichia coli, bactericidal action may come from the triggering of apoptosis via activation of the “suicide gene module” mazEF, and the same system has been identified in M.tb. Rifampin exhibits very effective activity against persisters in the continuation phase of treatment.

Rifampin induces certain cytochrome P450s, mainly the 3A4 isozyme. This dynamic creates challenges in treating patients suffering from both TB and HIV/AIDS. Administering rifampin along with some of the more commonly used  anti-retroviral medications is complicated, posing challenges in resource-poor settings – the same places where such co-infection is common.

Chronic exposure to rifampin may cause nausea and vomiting and unconsciousness, as per the FDA label. Hepatotoxicity is generally rare with rifampin alone but with preexisting conditions it can be exacerbated. 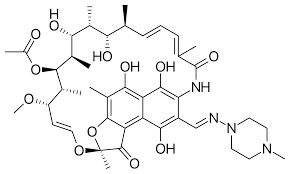