Ethambutol is one of the drugs used in standard, first-line TB therapy for drug-sensitive patients. It was discovered in 1961. According to the drug’s FDA label, no cross-resistance with other TB agents has been observed.

Ethambutol inhibits arabinosyl transferases involved in cell-wall biosynthesis; in Mycobacterium smegmatis two polymers seem to be directly affected, arabinogalactan (AG) and lipoarabinomannan (LAM). AG forms part of the mucolyl-AG-peptidoglycan layer which anchors the peptidoglycan layer to the lipid-mycolic acid outer layer. LAM appears to be attached to the cell membrane via phosphatidyl-inositol.

The most common side effect of ethambutol is optic neuropathy, generally reversible although irreversible blindness has been reported. Hepatotoxicity has been also been reported. Other side effects that have been observed are pruritus, joint pain, gastrointestinal upset, abdominal pain, malaise, headache, dizziness, mental confusion, disorientation, and possible hallucinations, as per the FDA label. 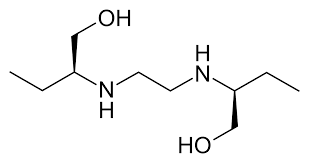