Today, TB Alliance held a virtual meeting of its Stakeholders Association and other tuberculosis (TB) and global health stakeholders around the world to highlight the recent rapid communication issued by the World Health Organization (WHO) Global Tuberculosis Programme regarding updated guidelines for treating drug-resistant tuberculosis (DR-TB) and their potential impact on DR-TB therapy.

Based on new clinical evidence presented and published over the past year, the new guidelines allow for the programmatic implementation of treating almost all forms of DR-TB with pretomanid-containing regimens, either BPaLM (a combination of bedaquiline, pretomanid, linezolid and moxifloxacin) or BPaL (bedaquiline, pretomanid and linezolid). This guidance expands use of an all-oral, six-month treatment regimen to a majority of the estimated 500,000 people who develop DR-TB each year. BPaL has been approved by 17 regulatory agencies, recommended by the WHO, and procured by more than 30 countries to date.

The event featured updates on initiatives to rapidly scale access to the new therapies, stories from patients who have been treated with BPaL and programs that have implemented the regimen – including Ukraine, the first country to initiate operational research of the BPaL regimen – and a panel discussion on next steps to increase uptake and implementation.

Mitchell Warren, SHA President, opened the meeting by noting the significance of shorter, effective DR-TB therapies and reminding us that those suffering from TB must always remain at the core of our mission by stating. “As important as research is, as important as product development is – all of this work begins with the patient in mind." 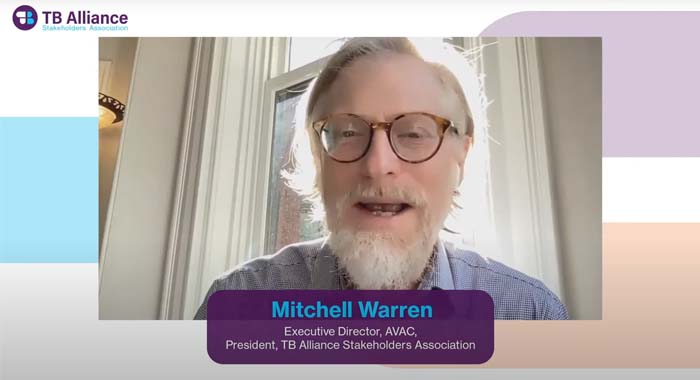 Dr. Mel Spigelman, TB Alliance President and CEO, traced the development of BPaL, detailing the key findings of the Nix-TB and ZeNix trials. Dr. Spigelman cited the importance of the new WHO rapid communication, but returned to the importance of ensuring new therapies reach those in need, saying, “All of this work is not worth that much if we don’t get it quickly to patients … and see the results on the ground.” 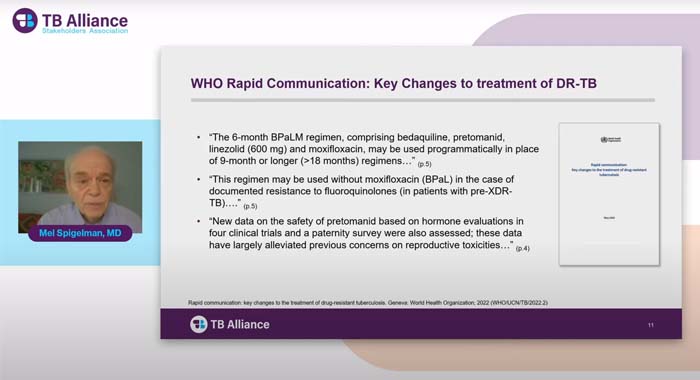 Following a video detailing a Ukrainian DR-TB patient’s experience with the BPaL regimen, Dr. Nataliia Lytvynenko, Head of the MDR-TB Research Centre, National Institute of Phthisiology and Pulmonology (NIPP) in Ukraine provided updates from the country’s experience participating in LIFT-TB, an operational research initiative to expedite uptake and implementation of pretomanid-based DR-TB therapy. Dr. Lytvynenko relayed the data on patient outcomes and remarked on the benefits of shortened DR-TB therapies especially in the context of the disruption to healthcare in Ukraine. She also noted that NIPP “chose to keep patients on treatment in war conditions – the shorter regimens with a small amount of pills, like BPaL, is optimal.” 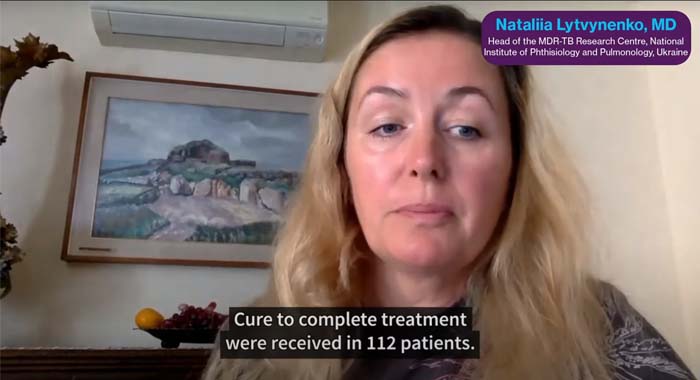 A panel discussion followed, focusing on country-level perspectives on the rapid communication and its implications for researchers, policy makers, TB health care providers, advocates, and patients. Louie Zepeda-Teng, President, TB People Philippines and DR-TB survivor opened the panel by capturing the excitement in the TB patient and advocacy communities for the new DR-TB therapies, stating “when we heard about the [WHO] rapid communication, we were all excited because with what I had experienced – 24 months of MDR treatment with injections — and we were all just amazed with the development of these regimens… Now, it’s just going to be three medications and as short as six months.” 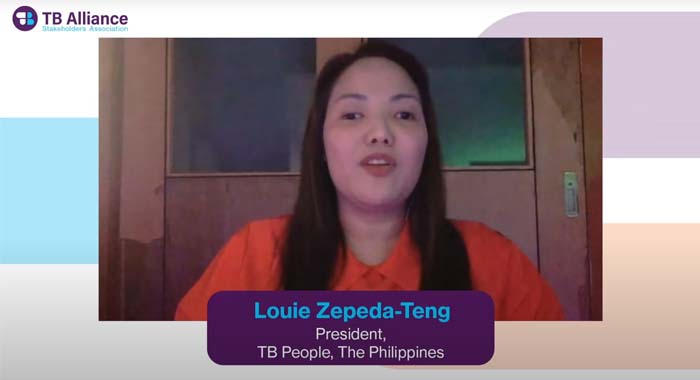 Norbert Ndjeka, Chief Director of TB Control and Management in South Africa’s National Department of Health, spoke on experiences treating DR-TB patients with BPaL in South Africa, including plans to enable national access to the regimen before January 2023. Dr. Ndjeka expressed eagerness in this regard, remarking, “I’m hoping to get pretomanid to 3,000 individuals within the next two to three months.” 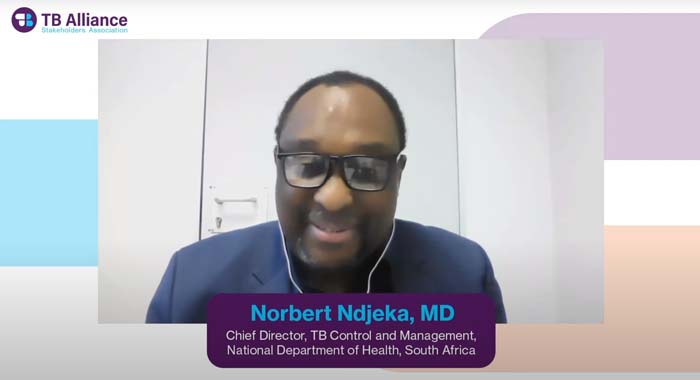 Dr. Suvanand Sahu, Deputy Executive Director, Stop TB Partnership underscored the benefits of shortened therapies and the importance of continued advocacy and funding to fuel the rapid expansion of access to new TB technologies. Remarking on the next steps for improving DR-TB therapy, Dr. Sahu stated, “I think a six-month BPaL or BPaLM regimen should become the norm in DR-TB treatment and no longer an exception.” 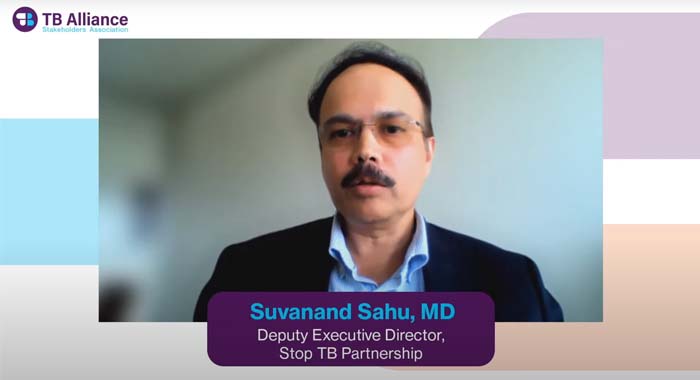 Mitchell Warren closed the event by once again focusing on the importance of turning scientific advances into programmatic realities that are system- and people-centered. In looking forward, Warren noted that the group has given us a “remarkable to-do list and remarkable motivation to get moving faster – together.” 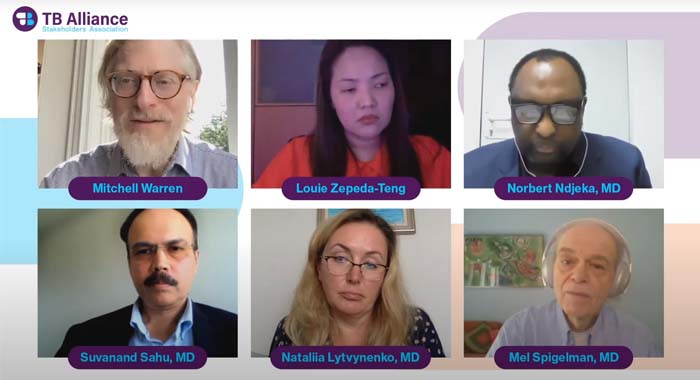 Please find a recording of the event below:

This meeting was also recorded in French, Portuguese, Russian, and Spanish. Recordings of the translated versions will be available shortly on this page, as well as our YouTube channel.