TB Alliance’s Stakeholders Association (SHA) held its annual meeting on Wednesday, October 30, ahead of the 50th Union World Conference on Lung Health in Hyderabad, India. In acknowledgement of recent progress, members discussed strategic opportunities for TB Alliance and the SHA over the coming years.

Mitchell Warren, executive director of AVAC and newly-elected SHA president, opened the meeting. In his welcoming remarks, Warren acknowledged that TB Alliance – and the TB field overall – increasingly finds itself at the intersection of research and community engagement. For partnership-driven organizations like TB Alliance, connections between community groups, advocates, clinical research centers and research partners underscores the importance of institutions like the SHA. Warren emphasized that the research and development agenda is not carried out in a silo, and it is essential to advance scientific progress in close consultation with community stakeholders, noting that "it's really only through a mechanism like the Stakeholders Association that we can help bring insights and perspective into these conversations."

In remarks to the SHA, Kamugasha shared his personal story of the loss of his wife and son as a result of TB and HIV. He noted that the memories of people lost to TB and HIV can strengthen the resolve to advocate for others, with the goal that those affected by TB in the future have more effective paths to treatment and cure.

"I am using my voice to prove to the world that, indeed, TB is not a disease of the poor, because I was not poor. I was born in one of the wealthiest families in my region, but this never stopped TB from exterminating my young family. What I faced during their TB treatment was the strength that kept me going on with TB/HIV advocacy," said Kamugasha. "I am looking forward to being part of this Association, and to be a part of this conversation about innovating TB drug R&D, providing my perspective from my experience, and representing my constituency of advocates, civil society and the TB-affected community in my region."

Sommerfeld then introduced Schenina, who shared her personal story of being a TB patient and her subsequent work in patient advocacy. "Many people who I support don’t handle the treatment, because there are too many pills and they've lost their hearing, like me," Schenina noted, while also encouraging everyone to work with patients and to keep their perspectives in mind through every aspect of TB drug research, development and delivery.

In his State of the TB Alliance address, President and C.E.O. Dr. Mel Spigelman recognized the history of the organization and discussed the impact of the PDP model since the organization was founded in 2000. Spigelman's remarks traced the evolution of TB drug development as it has transitioned from the advancement individual drugs to the introduction of combination regimens. Spigelman then provided an update on progress made over the past year, including the regulatory approval of a new TB drug regimen studied in the Nix-TB clinical trial. 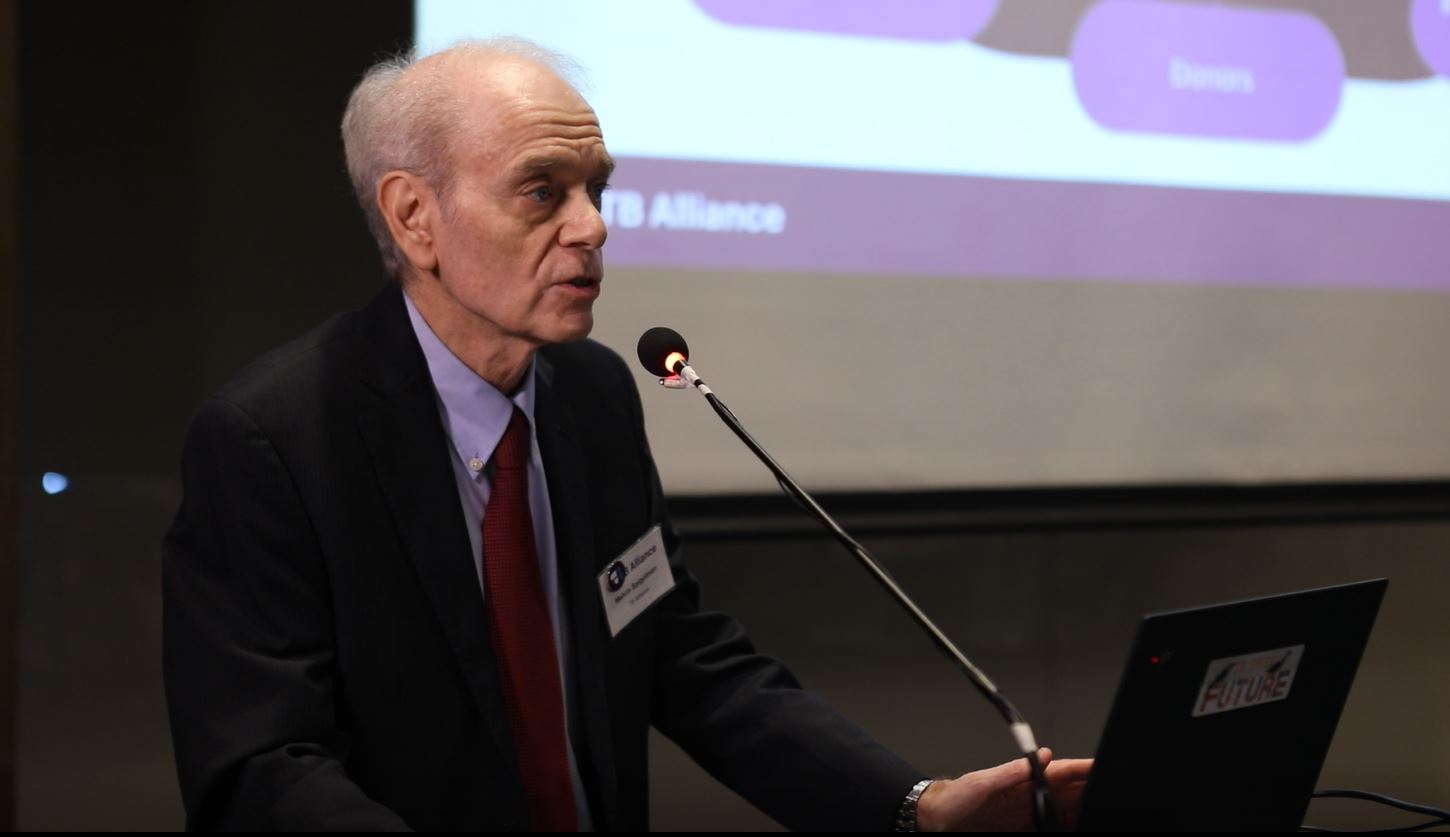 “We took a disease that, at the time that we started the clinical trial, had treatment that consisted of 18, 24 months or even longer duration, and could shorten that to six months. We had regimens – treatment programs – for these diseases that were complicated,” said Spigelman. “And now we have a three-drug, all-oral, set regimen.” Spigelman added that “at the time we started the Nix-TB trial in South Africa, the norm for treating this disease resulted in efficacy on the order of about 20 percent cure rate, that now was brought into the 90 percent range with this regimen.”

He also shared an update about improved pediatric formulations of first-line TB therapy, of which one million treatment courses have now been ordered by more than 90 countries, representing approximately 95 percent of the global childhood TB burden.

Sun described organizational goals to further improve TB treatment, and the need to expand the portfolio for potential new breakthroughs in treatment. "If our goal here in the future, our job, is to zero in on the next breakthrough regimen, we have a number of challenges besides having a full pipeline from which to select candidate compounds," said Sun. "We have to continually refine our preclinical models beyond where they are currently." He also noted that "we have to think about the ways to improve the designs of clinical trials."

Warren closed the meeting by leading a Q&A session in which SHA members discussed specifics about the Nix-TB clinical trial data, global access to new treatments, as well as longer-term strategy for TB Alliance. Members discussed plans for expanding work on pediatric formulations, the design of future clinical trials, access to therapy in high-burden countries, and coordination with diagnostic development to optimize the introduction of new and future treatments.

Please direct any inquiries about the event to SHA@tballiance.org.

Apply to Join the SHA